The Eivissa City Council is launching a plan to expand the pedestrian space aimed at guaranteeing that the movement of citizens is safe because of the current health crisis caused by COVID-19 and following the instructions of the health authorities.

The objective of this initiative, once the period of confinement is over, is to condition the city to facilitate travel on foot and by bicycle.

Eivissa Oberta is an initiative of the departments of Public Roads, Mobility and Environment and will open the city from E-10 (the closest round to the center) inwards, for bicycles and pedestrians on weekends.

More than 15,000 m² of streets open to pedestrians are enabled on Saturdays and Sundays, and more than 3,000 m² of new sidewalks to enjoy walks safely, maintaining the safety distance recommended by health authorities.

Access to private parking, paid parking and public service will be enabled in all cases, always respecting pedestrians and bicycles that have preference. In the same way that residents of this area of the city can access from the E-10 inwards.

These routes will be enabled for pedestrians and bicycles on Saturdays first thing in the morning and will reopen to traffic on Sunday at 11pm.As for the performance of the E-10 inwards, it will start on Saturday nights and end 24 hours later.

This is a provisional measure to provide citizens with more and better spaces for pedestrians and to maintain a safe distance during the de-escalation of the confinement caused by the spread of Covid-19.

With these interventions, we comply with all the indications made by the authorities of the Government of Spain.

The streets that will be available to pedestrians during the weekends are:

One of the actions included in the Eivissa Oberta plan is to pose more pedestrian sidewalks for the public. In total, 3,000 m² of new provisional pavements will be placed which will give more security and more space to citizens.

The new sidewalks are:

– Castella, from Abad and Lasierra to Extremadura, widening the left sidewalk using all the parking space.

These measures will be expanded with other mobility actions, such as the horizontal marking of marks that indicate the priority of the bicycle. 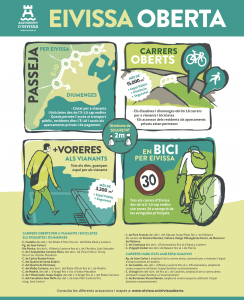