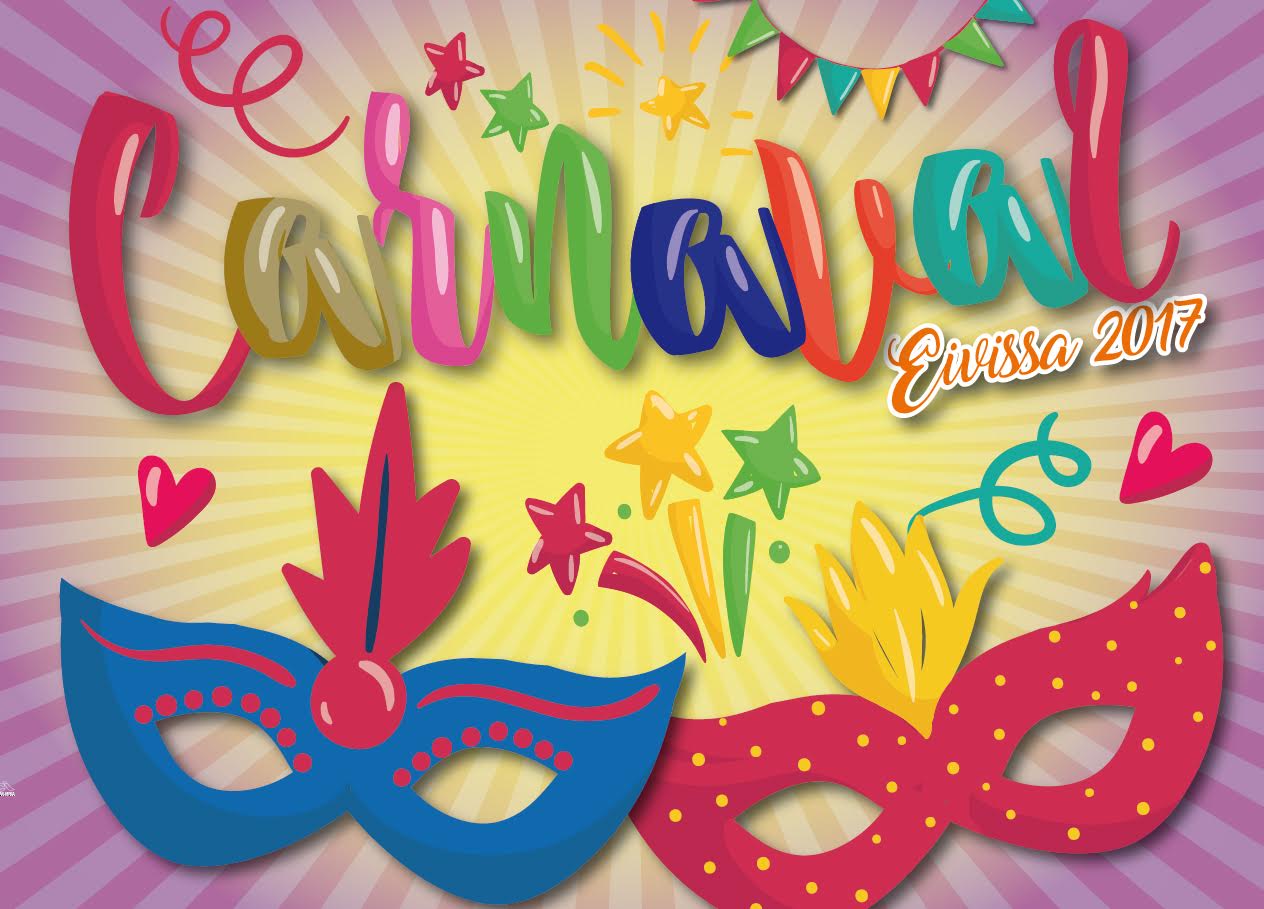 Carnival is one of the year’s most eagerly awaited events on the island of Ibiza and it is celebrated equally by children, adults, schools, neighbourhood associations, families, locals and, of course, visitors making the most of the island’s mild February climate for a relaxing getaway. 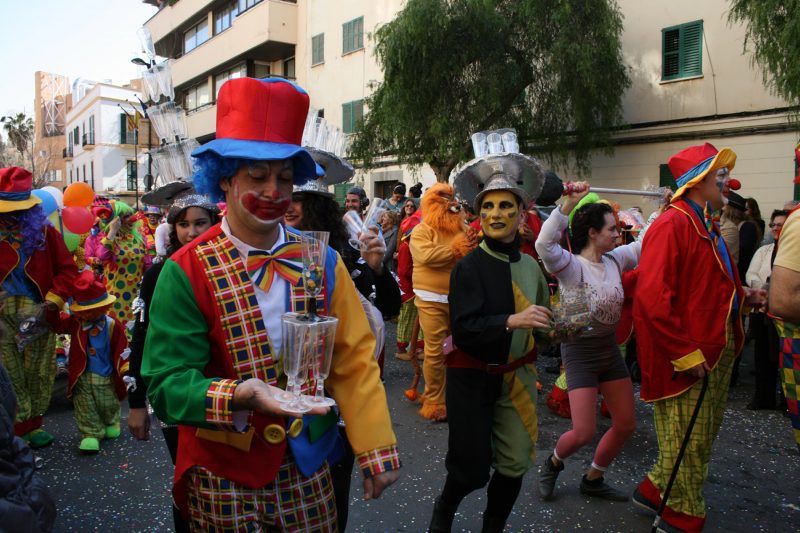 The crowning moment of the festival is the “Rúa de Carnaval”, when the town’s main streets throng with multitudes of costumed carnival goers in a kaleidoscopic of colour, festival ambience in which prizes are awarded for the most original, extravagant and amusing getups. In Ibiza in particular, Carnival is a popular traditional festival that is celebrated with gusto and concludes with the traditional “burying of the sardine”. 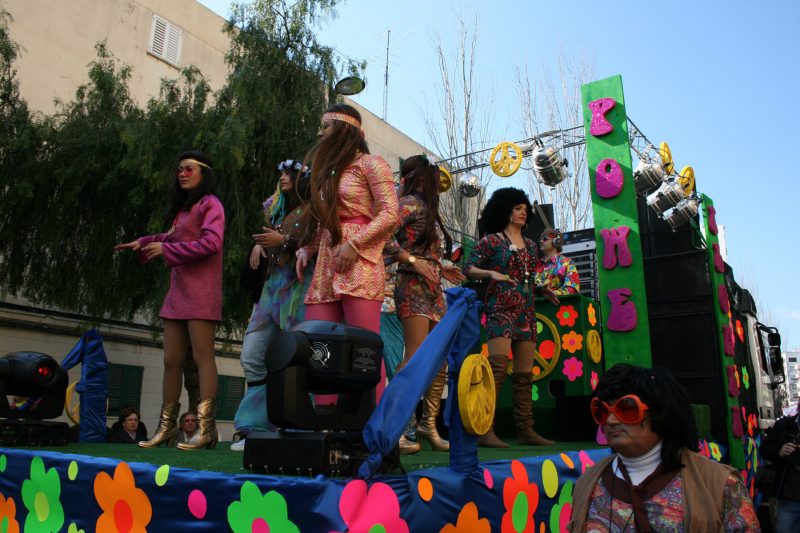 In addition to the traditional Carnival parade of troupes and burying of the sardine the festivities programme also features concerts, children’s activities and events offering fun for all the family, music and dancing, culinary delights and all the magic of a cosmopolitan Mediterranean seaside town that is known the world over for the beauty of its historic World Heritage old quarter. 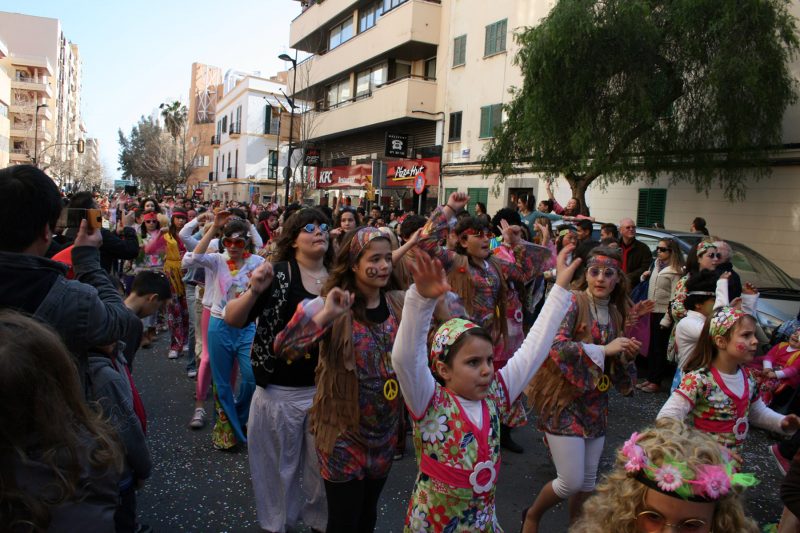 This is precisely the location for the main Carnival 2017 programme of events, which takes place from the 23rd of February to the 1st of March, and features, among many other attractions:
–Rúa de carnaval (street parade): Sunday the 26th of February.
The parade of troupes begins at 11.30 am on the Av. de Sant Josep and takes in Av. de España, Av. de Ignasi Wallis, Av. de Isidor Macabich, Carrer del Bisbe Abad y Lasierra and Carrer José Zornoza Bernabeu, and winds up with a gigantic paella for all-comers in the Plaça d’Antoni Albert i Nieto.
– Popular Fat Thursday “tortilla” festival: 23rd of February
Where: Plaça d’Antoni Albert i Nieto.
When: 5.30 pm to 8.30 pm
Programme: Popular festival with giant tortillas (Spanish omelette), choreography and other workshops and games for all the family brought to you by Passion Dance Producciones and the animation school s’Espurna – includes a children’s mariol·los (hand-made costumes) competition.
–Carnival Concert: Friday the 24th of February
A concert offered by the Banda Sinfónica Ciutat d’Eivissa conducted by Adolfo Villalonga – 9 pm in the marquee on the Plaça d’Antoni Albert i Nieto.
-Family musical performance: Saturday the 25th of February.
-‘Aventura canina’ (A Canine Adventure): A family-oriented music show featuring famous animated characters from television series.
-Workshops offered by the animation school s’Espurna beginning at 7 pm in the marquee on the Plaça d’Antoni Albert i Nieto.
-On the Plaça de la Constitució and surrounding streets the Federation of Marine Business Associations has organised a number of activities in collaboration with the local council. From 4.30 to 8 pm these activities will include make-up, costume and mariol·los workshops, music, children’s games organised by Acrobatik-k and a costume competition.
–Pool costumes: Monday the 27th of February.
Where: Es Viver pool.
When: 5 to 7 pm.
Programme: Children’s pool games with costumes and, from 8 to 9.30 pm, a costumed water aerobics masterclass.
–Tuesday the 28th of February
Carnival Animation.
Where: Marquee on the Plaça d’Antoni Albert i Nieto.
When: Beginning at 7 pm.
Programme: Los que te comen la oreja and Los maquinistas, the carnival troupe El Pellizco and La Comparsa Clandestina.
–Traditional burying of the sardine: Wednesday the 1st of March.
As with every year the closure of the carnival festivities is celebrated with the traditional “burying of the sardine”.
When: Wednesday the 1st of March.
When: 6 pm to midnight.
Where: Parque de la Paz.
Programme: Popular “Sardinada” with traditional dances by the Es Clot dance troupe and a performance by Ricardito.
The traditional “burying of the sardine” ceremony will take place at 7 pm, following which a street parade will then set out from the square, taking in Carrer Agapito Llobet, Carrer del País Valencià, Carrer de Navarra, Carrer de Murcia, Carrer Josep Riquer Llobet and finishing up at Parque de la Paz. The parade is organised by the Es Clot Neighbours’ Association. 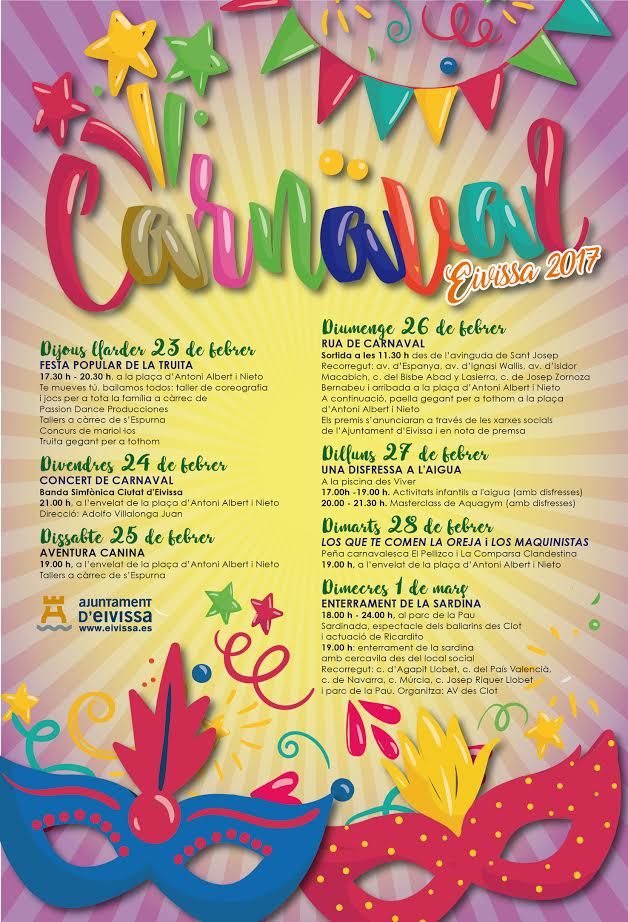