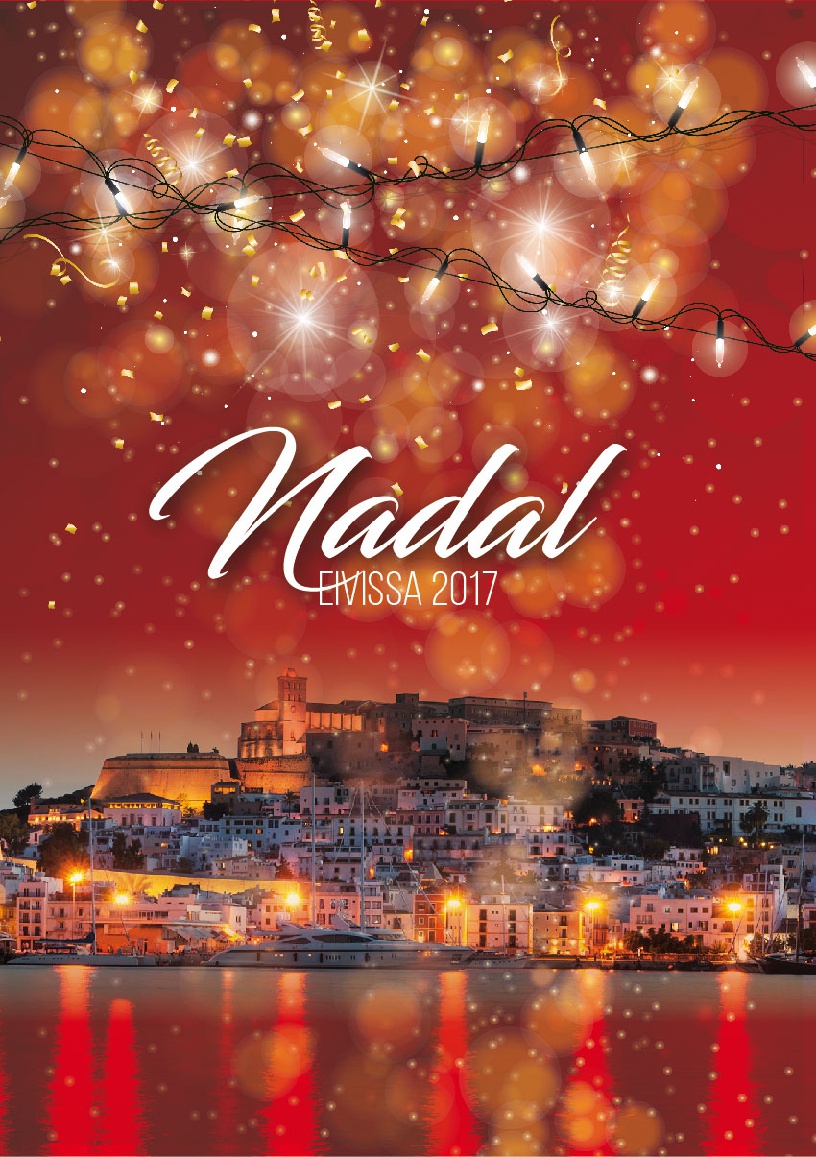 Celebrate Christmas in the city of Ibiza, with a programme of festivities that includes cultural activities, music in the streets, children’s activities, sports, Christmas markets and much more.

The Christmas season has started: The Christmas festivities in the city of Ibiza began on 1 December at 6:30pm in Plaza Antoni Albert i Nieto when the lights of the Christmas tree, which is 16 metres high, were turned on.
As every year, this year’s inauguration was accompanied by a performance by the Children’s Choir of the Music School run by the Patronato Municipal.
At 7:30pm the Christmas tree made by the ironwork students at the Art School was unveiled. This inauguration was accompanied by a free serving of hot chocolate and churros.
The moment of turning on the Christmas lights was especially important, because “this year, the city’s Christmas lights are new and of the highest quality, they are more modern, safer and adapted to our city”.
There will be Christmas lights and decorations in the main streets of the city of Ibiza. Thre will also be lights at the three roundabouts where drivers enter the city (Ses Figueretes, Can Misses and the entrance in Ignasi Wallis) and the avenue of Vara de Rey, where there will be an illuminated tree which is 12 metres high. The festive lights for these holidays can also be appreciated along the whole length of the avenue and in the Plaza del Parque.
This year the organization responsible for the Christmas lights in the city of Ibiza is the lighting company Ximénez, which has 50 years’ experience and similar installations in Madrid, Barcelona, London and New York.
Another of the new items this year are the Christmas markets which will be set up in the Plaza del Parque, with the same traditional wooden stalls that are found in other markets in other countries and which are perfectly adapted to their setting in the pedestrianized area, where 10 of these stalls will be erected.
The Es Juvert market for Christmas items and craft work will be installed in the Plaza del Parque from January 1 to 5, from 11am to 10pm.
In the pedestrianized street of Pedro de Portugal, there will be a second Christmas market installed. The Calle Pedro de Portugal Christmas Market will be open from December 1 to January 6, from 11am to 2pm and from 5pm to 10pm.
In order to extend the Christmas spirit across the whole city, there are a number of activities planned and music performances in the streets of different neighbourhoods. Groups such as Rels, Quin Delibat or The Frigolos, Ivan Doménech and Joan Barbé, among others, can be found on different days on different stages across the city.

Children’s activities
Children are the centre of attention at Christmas in Eivissa. The programme of family activities are centred on library of Can Ventosa, the Plaza de Antoni Albert i Nieto, the Paseo de Vara de Rey and the Plaza del Parque.
This programme includes concerts, theatre performances, workshops and story-telling activities so that the youngest children can enjoy this most magical time of year,
The programme of activities includes the following activities:
-Collection of letters to Santa Claus
Friday 22 December, from 6:30pm to 8:30pm.
Place: Subida al Rastrillo (in front of Mercat Vell).
Organized by: Traders Federation of La Marina-Puerto de Eivissa.
-Children’s show “The Adventures of Geppetto and Pinocchio”
A show that combines shadows, puppets and actors
Date: Thursday 28 December
6pm, in Plaza Antoni Albert i Nieto.
Free.
-Musical Operation Santa 3
A Musical for all the family.
Date: Friday 29 December.
6:30pm, in Plaza Antoni Albert i Nieto.
Free.
-Children’s cinema
Trolls
Saturday 30 December
6pm in Plaza Antoni Albert i Nieto.
Free.
-Diverspai
Recinto Ferial of Ibiza
Timetable: from 10:30am to 2pm and from 5pm to 8:30pm.
Tickets: €2/ Season tickets: €10
Adults: Free
Organized by: Consell d’Eivissa
-Christmas is a circus
Enjoy the most festive circus in Ibiza. Free show for all the family.
On January 2, 3 and 4, from 4pm to 8pm in the Es Viver sports pavilion.
Organized by Acrobati-k Espectáculos.
-Visit to Ibiza of the royal pages
Reception of the royal pages, children’s activities and workshops.
Take your letter to the royal pages between 5pm and 7pm.
Tuesday January 2, in the Parque de la Pau
Wednesday January 3, in Paseo de Vara de Rey
Thursday January 4, in Plaza Antoni Albert i Nieto.
– “The Wizard of Oz”, the musical
A version of the tale by L.Frank Baum, in which Dorothy meets up with some very modern characters, who are also lots of fun.
Dates: 3 and 4 January
Performances: 5pm and 7:30pm, at the Espai Cultural Can Ventosa.
Tickets: €10 adults and €5 children.
The profits will be donated to the association APNEEF
-Funfairs: Families can also attend the two funfairs, from November 24 to January 21, located at Calle des Cubells 25-27 and Calle de Albarca 8-12 (Can Misses).

New Year’s Eve party
Music and dancing for everyone, with a DJ
From 9pm, in the Plaza del Parque. At midnight, the traditional 12 New Year grapes
Free entrance
Organized by: Traders association of Plaza del Parque.

The Three Kings in Ibiza
They will disembark at the Port of Ibiza on the night of January 5, in the renovated Es Martel, from where they will set out on the traditional King’s Night Parade, which will take them through the main streets of the city.
6.30 pm: Arrival of the Three Kings from the East at Martell (port of Ibiza)
Route: Andenes del Puerto, Avenida de Bartolomé Roselló, Isidor Macabich, País Valenciá, Avenida de Espanya, Ignasi Wallis and Abat y Lasierra, until they arrive at Plaza de Antoni Albert i Nieto.
Saturday January 6: Three Kings’ Parade of Es Clot.
10am, in the Parque de la Pau.
Concert of Christmas carols with hot chocolate
12am: Dances of bulerías, by pupils of the Es Clot Neighbourhood Association

Christmas sporting activities in Ibiza
-IV edition of ‘Three days of Trail Ibiza’
From 1 to 3 December
Friday 1: Night stage
Saturday 2: Three options: 24, 46 and 85 kilometres between Sant Antoni and the municipal athletics track of Can Misses.
Sunday 3: 10.46 km (urban circuit in La Marina and Dalt Vila).
Information and inscriptions: www.trailibiza.com
-Christmas Swimming Cup
This took place on Saturday December 2 in the municipal swimming pool of Can Misses, from 5pm, with a spectacular programme of speed tests and relay races.
Organized by: Club Natación Eivissa.
Patrocina el Patronat Municipal d’Esports del Ajuntament d’Eivissa.
-Popular walk to Talaia de Sant Josep
The hiking trail will take place on Sunday December 3.
The bus with the participants will set out from the swimming pool of Can Misses for the 9 km walk from Sant Josep to Sa Talaia.
Inscriptions: Municipal Swimming Pools of Es Viver and Can Misses.
-VIII edition of the World Heritage Race
This is held on Saturday December 9;
Cycle tourism trail to Es Codolar
This is held on Sunday December 17: There are three races adapted to all categories.
Start from Paseo Joan Carles I.
First race: start at 4pm. Categories under 10s, under 12s and special, with a distance of 600m.
Second race: Start at 4:15pm Infant and cadet categories.
Third race: Start at 4:30pm. Other categories. 10,000 metres. Two laps of a circuit that runs through Dalt Vila, La Marina, Avenida de Santa Eulària and Passeig Maritim.
Inscriptions: www.elitechip.net
Organized by: Ibiza City Council and Club Atletisme Pitiús.
-Athletics race to the Cathedral
This traditional contest is held on December 31, and all participants in this year’s event must donate a toy when entering in the race.
This is an athletics event open to the public, for all categories from under 12s to veterans, with special categories and costumes.
4.30 pm: Start in Passeig Maritim. Distance: 2,200 metres
6 pm: Presentation of prizes and gift lottery
More information and inscriptions: www.elitechip.net
Organized by: C.A. Pitiús, with the collaboration of the Patronat d’Esports d’Eivissa.