Tickets for the concerts of Santa Cecilia that will be offered by Cor Ciutat d’Eivissa and the Municipal Band on November 23 and 24, in the Can Ventosa Cultural Space, are already on sale. The two concerts are beneficial and the proceeds will go to the Deixalles Foundation and the Dignidad association.

On Saturday, November 23, at 19h, Cor Ciutat d’Eivissa will offer a concert that will feature the participation of former singers who have passed through the Choir in the last quarter of the century. This show is included in the event cycle of the Cor Ciutat d’Eivissa to commemorate its 25th anniversary. It will also feature the presence of the sopranos soloists Irantzu Bartolomé and Yolanda Veny; tenor soloist Diego Roman; duets by Yolanda Veny, Maria Navarro, Jesús Bernal and Michael Linneweber; to the piano Santi Pérez and bagpipe and zanfona, Javier Vàzquez. The choir will perform under the direction of Miguel San Miguel Fuster and will feature as guest director with Nekane Piñuela. 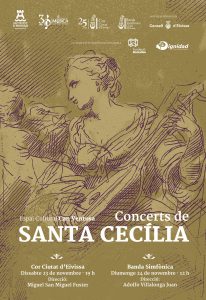